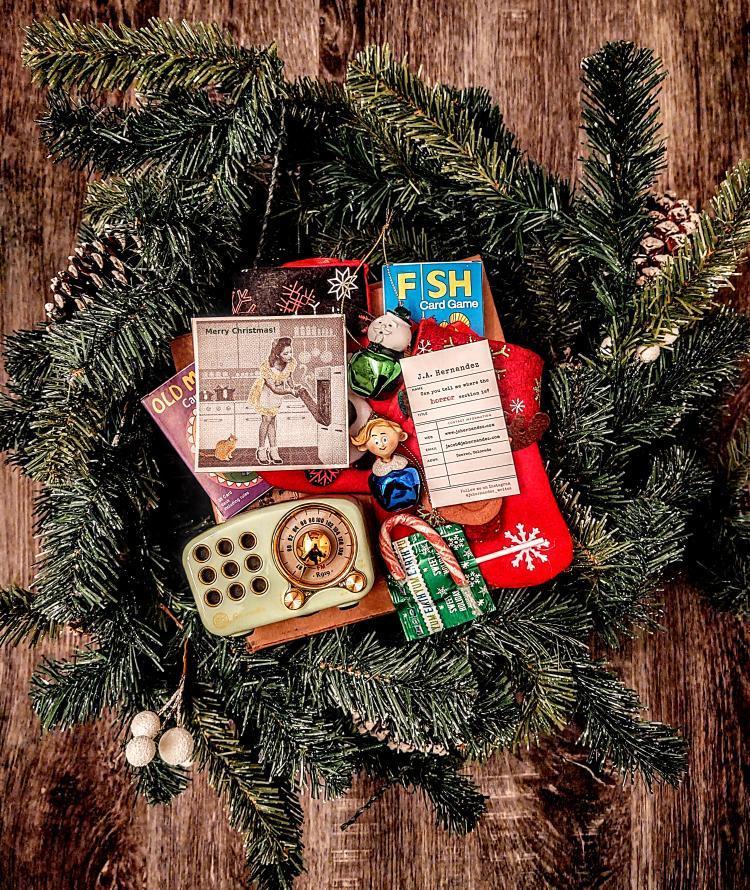 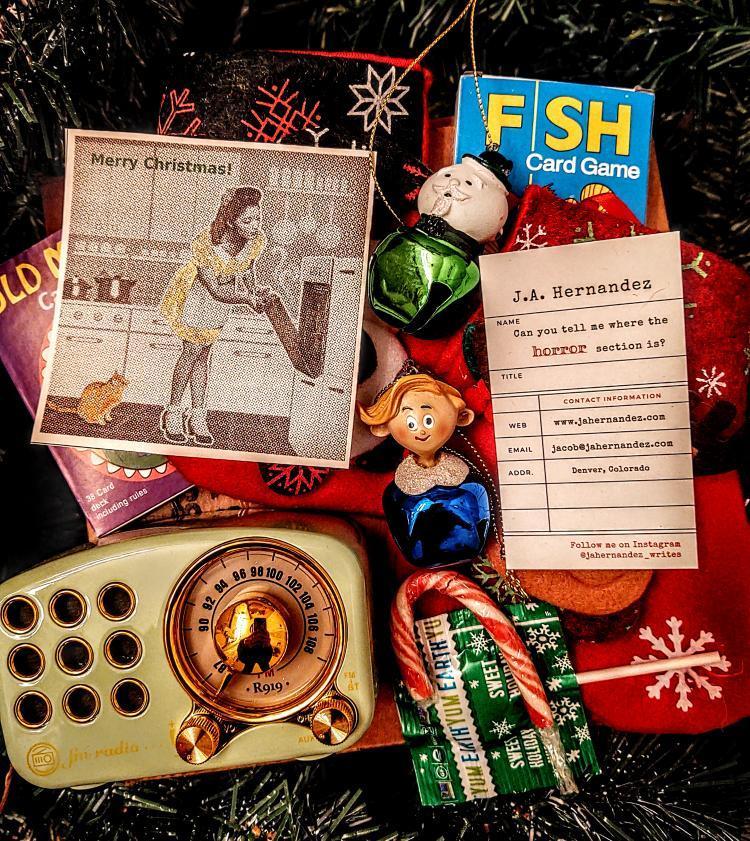 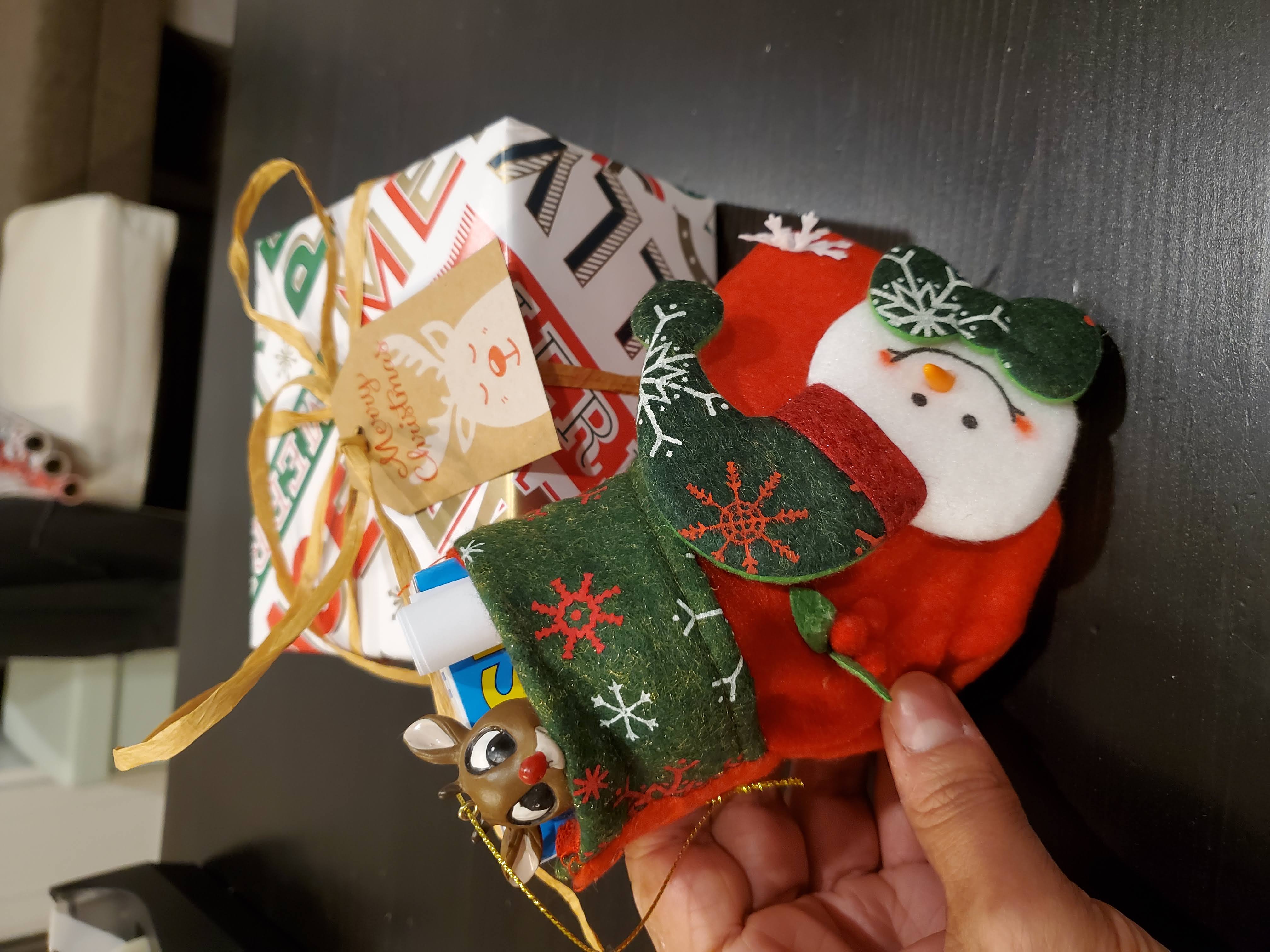 The first two images in the gallery are from my friend brutalbookshelf on Instagram. She was ecstatic and took some amazing pictures of her Christmas gift.

I made a few gifts for friends and mailed them out in early December. I didn't know how they would go over but suspected they might be well received. Turns out everyone who received one absolutely loved it.

All of the stories I write begin with a feeling that I want to convey. Back in the summer, I had a strong urge to write something to trigger a feeling called anemoia.

I ended up writing a Christmas-themed story called Night of the Living Cake Monsters (A Retro Creature Feature) during the summer and intended to throw it up on my website and leave it at that. But, I have a friend who loved it so much and supported me that I wanted to do something special for her.

I've done audio editing on and off over the years for various reasons. I recently refreshed my skills with short-form horror videos on Instagram and YouTube and made a short audio story for my newsletter. So, I thought I'd see what I could do with audio for my friend who loved the story so much. I felt that a few other friends might like this story in audiobook form as well.

The Night of the Living Cake Monsters story features Lily, a strong female protagonist. One of the episodes features her big orange British tabby cat named Mr. Kennedy Cuddlesworth. I looked at those and thought, "Yep. I can't do those voices." So I did a lot of digging into just hiring relatively inexpensive audiobook narrators. I found two amazing ones that recorded the story for me (it's only about an hour-long in total.) I did all of the audiobook masterings on it myself. It was a strange, uh—demanding amount of work to do this all myself.

Then...because I couldn't stop there (it's somewhat of a character trait built into me), I decided to go for the full-on anemoia Christmas experience.

I've always wanted to do something with retro radios, but I didn't know what. I love audiobooks in addition to e-books and print. I connected the two things and came up with the idea to try and give people some serious anemoia by putting my story on a retro radio.

I experimented with several retro radios to find one that felt right, worked the way I wanted, and had good audio. I finally found one, loaded my story onto it, and listened. Worked great! The audio is loaded up onto a little mini-sd card—which was vital because I needed a radio to let me play mp3 files in order.

So, I went on a big download spree on YouTube of 50s Christmas time radio and commercials, ripped the audio off from the video, and audio mastered all of those. Then I chopped it all up, mixed retro ads in amongst old radio and old Christmas songs, and loaded all that up on the radio. Then, just for fun, I added a full audiobook version of A Christmas Carol at the end. Then I customized the intro audio for each person.

I was all ready and tossed the 7 radios I made into boxes and shipped them off when I...uh...couldn't stop there...

I then researched a bunch of retro Christmas wrapping paper, tissue paper, toys, etc. I found all kinds of good stuff from the 50s and made little packages for each person that was slightly different. I didn't tell anyone what I was sending them, but I asked each person to choose their favorite color from a palette (the retro radio colors they ended up with.) I also included a stocking or two in each package, stuffed with awesome candy, a different hanging ornament from the old Rudolph movie, vintage print card games like Old Maid, Hearts, Fish, etc...

After all that, I finally felt like I had the right anemoia feel to the whole thing. So I shipped them out. 😂

The radios made a few rounds on Instagram, and I had someone reach out to me about them. She was such a huge fan of the idea that I made an extra one for her—and she even got a pretty unique ornament to go along with it.

I like experimenting with storytelling, and I can't go small with really anything. This was a fun adventure in anemoia, and I'm happy the people who received one of these enjoyed them so much. I only made a few because, well—I don't sell these things, and they're kind of a pain in the ass to make. But, it was all worth it to see how happy they made my friends. Each and everyone one of them had a massive shot of anemoia. That right there is precisely what I was after.